Ransomware is now a common practice for money-motivated cyber criminals. It's basically a type of software written in any system-based programming language that has the ability to hijack victim’s computer, encrypts files and then ask for a ransom amount to get them back. 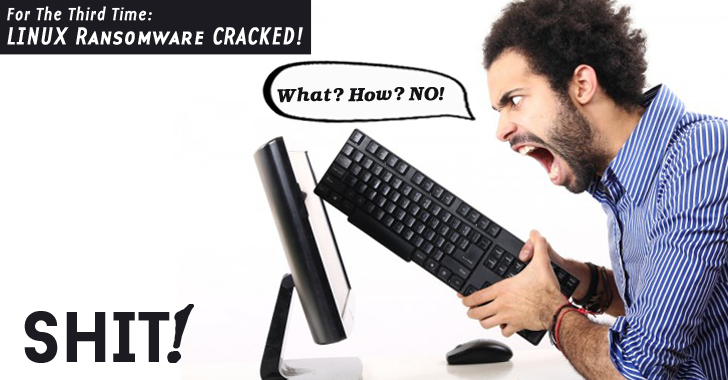 One such ransomware dubbed Linux.Encoder targets Linux-powered websites and servers by encrypting MySQL, Apache, and home/root folders associated with the target site and asks for 1 Bitcoin ($453.99) to decrypt those crucial files.
But, the good news is it is very easy to get rid of it.
The Malware author released the third version of the Linux.Encoder ransomware, which security researchers from Bitdefender have managed to crack, yet again, after breaking previous two versions.
However, before the team managed to release the Linux.Encoder decryption tool, the third iteration of Linux.Encoder ransomware, which was first discovered by antivirus maker Dr.Web, has infected a nearly 600 servers worldwide.

"As we expected, the creators of Linux.Encoder have fixed their previous bugs and have come up with a new and improved variant," says BitDefender boffin Radu Caragea. "Luckily for the victims, the new variant of Linux.Encoder is still vulnerable to key recovery attacks."

It seems that the malware authors of Linux.encoder ransomware are newbie programmers who are just motivated by the success of other popular ransomware such as CryptoWall and CryptoLocker.
Posted by Sarkari-JOB
Labels: Decrypt Ransomware, Decryption Tool, Encryption, Hacking News, Linux Ransomware, Malware, Ransomware, Security Researcher
Email ThisBlogThis!Share to TwitterShare to Facebook
at 13:15:00