How to install DenyHosts on centos 6

DenyHosts is a log-based intrusion prevention security tool for SSH servers written in Python. It is intended to prevent brute-force attacks on SSH servers by monitoring invalid login attempts in the authentication log and blocking the originating IP 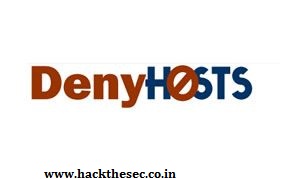 addresses. DenyHosts is developed by Phil Schwartz, who is also the developer of Kodos Python Regular Expression Debugger.
Install DenyHosts
First, add the EPEL repository. Then simply install the package from the EPEL repository:
Configure DenyHosts
Before starting DenyHosts, configure a white list of IPs that DenyHosts should never block. Again, DenyHosts uses TCP Wrappers. Hence, edit /etc/hosts.allow and add IPs, entire subnets, etc. For example,
Start DenyHosts
Configure the system to start DenyHosts at boot:
Basic things to be aware of:
Go through the DenyHosts configuration file (/etc/denyhosts.conf) and tune it to your liking. Be sure to restart DenyHosts (service denyhosts restart) if you change anything.
Posted by Unknown
Labels: Centos, centos_server, centos6, DenyHosts, Linux, Linux Tutorial, Unix
Email ThisBlogThis!Share to TwitterShare to Facebook
at 12:59:00